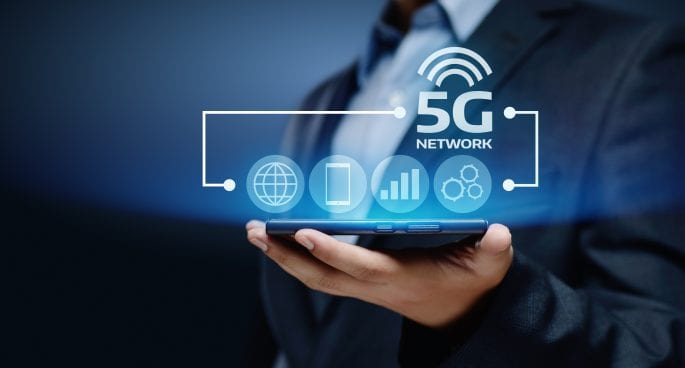 5G technology is the next big update for the UK mobile industry. But what is 5G and how will it make a difference to business communications over the coming years?

5G stands for “fifth generation”. The first generation of mobile networks was first introduced back in the 1980s. We all remember “brick-sized” phones carried by city brokers in striped shirts and loud ties. These were analogue networks that only carried voice signal, and were not very reliable.

In the ‘90s, 2G phones were launched. These were digital and were the first systems capable of carrying text messages between users. Later on, they also introduced new features such as picture messages.

The noughties brought us 3G. This ushered in the era of video calling and mobile data. With 3G, the app revolution began. Users were able to browse the internet on their phones and handle multiple phone apps which connected to the internet directly.

4G improved this, with a faster performance for all those activities. Phones were designed to support mobile internet and higher speeds for activities such as video streaming and gaming.

Now, networks are changing again, and 5G is set to land in the UK very soon.

The biggest difference in 5G networks, when they arrive, will be in the amount of data they will be able to handle. With more data also comes the ability to connect more devices simultaneously. All of it is able to happen at much faster speeds than is possible today through 4G and existing technology.

Just to put that into context, current 4G download speeds are at a maximum at around 50 megabits per second. The reality is that they never reach this speed in real-world conditions. Most people’s networks are much slower.

5G networks, on the hand, have been demonstrated to run at up more than 100 times the speed of 4G. For regular domestic users, this would mean that with a good 5G connection, you’d be able to stream a 4K video directly to your smartphone without experience any lag.

5G networks can also handle many devices at one time. This makes them excellent for businesses and for the Internet of Things devices. This is going to be particularly innovative for future smart buildings and the “smart cities” that are envisioned to grow.

How does 5G manage to be so much faster?

All the previous generations of mobile networks use radio waves to broadcast data. 5G is faster because it uses parts of the electromagnetic spectrum that aren’t currently being used by other kinds of network.

This is only possible because of new developments in receiver and transmitter technology. 5G networks can therefore communicate using very high and very low-frequency waves. Until recently this just wasn’t possible.

5G really is a revolution in mobile communication.

Although the UK is in the middle of preparations for 5G networks, there is currently no 5G-ready smartphone available on the market.

That could change. 5G versions Samsung, LG, Sony, HTC and Xiaomi phones have announced. And some may be available in 2019, but there is no guarantee. We will just have to wait and see!

A widespread of mobile manufacturers are trialling 5G networks. But whether we will actually see 5G connections in 2019 is another matter entirely. It’s likely that we’ll have 5G-ready devices before the network providers are ready to roll out widespread coverage.

Whilst it’s exciting to think about the future of 5G, for now, 4G is still the only viable option. But that might not be for long and businesses will definitely be able to benefit once 5G really is ready.